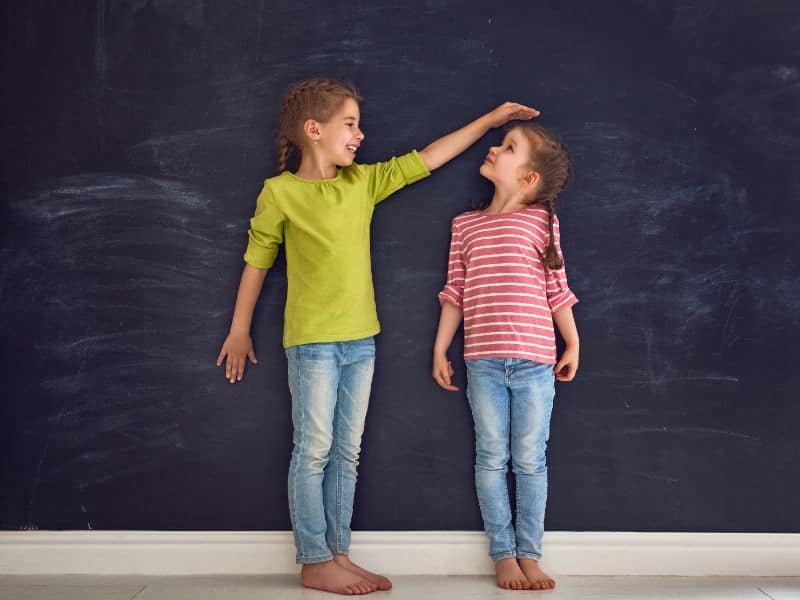 Height is directly proportional to both appearance and success. It’s apparent that the taller a person, the more attractive and successful he or she is considered to be. This is the reason why many short people are obsessed with their stature.

They believe that if they were taller, they would be leading happier lives. Some of them are willing to do anything necessary to add even an inch to their height. It’s a good thing that there are many different steps that they may take to grow taller, most of which are natural, safe, and effective.

So, does 1 inch make a difference in height?

When it comes to appearance, an inch doesn’t make a lot of difference. It is even hard to figure out which person is taller by an inch visually. However, if it’s written on a resume or dating profile, an inch can make a significant difference. This is particularly true for a person of below-average height.

Even though it’s true that an inch doesn’t seem to be a lot, it can mean the world to someone who is not happy with his or her height.

Read on to know when an inch matters and when it should not leave you feeling miserable. Below we will talk about some of the most important things that you need to know about having an extra inch to your height. If you have family and friends who obsess about their height, share this article on social media later on.

An Inch Makes a Difference When Dating Online

Perhaps you have already heard or read about the fact that, on online dating sites, most women prefer males who are 6 feet or taller.

So, in other words, if you are 5″10′ tall, you may not get plenty of attention. Using this example, it’s clear that an inch counts a lot and can make a huge difference in dating.

Even if you are taller than 5″3′, which is considered as very short in males, being an inch taller than everyone else can matter a lot when it comes to online dating.

For instance, you and another single male are pretty much the same regarding facial features, personality traits, interests, hobbies, and educational background.

However, you are 5″11′ inches tall, and the other guy is 6 feet tall it’s very much likely for the other guy to get the attention of more females because of his height.

Even though it’s true that the two of you are just an inch apart, which doesn’t matter in real life, on paper, however, a single inch is enough to make the other guy seem to be more physically attractive than you.

It’s no secret that, in certain sports, some of the best athletes are the tallest of the bunch. Generally speaking, you have to be tall to be a star in the likes of basketball, swimming, volleyball, and running. In many cases, being an inch taller matters a lot.

For instance, if two people are applying to become goalkeepers for a soccer team and they have the same skills and experience, the one who is an inch taller is likely to be picked. That’s because it’s more likely for the person to have a wider reach, which is important for a goalkeeper to have.

However, there are other sports in which short people may participate in. As a matter of fact, in these sports, short people tend to excel more than tall people.

Some of them are:

No matter which sport you wish to engage in, many other things matter aside from one’s height. Some of them include skills, discipline, and commitment. In sports where height is regarded as an advantage, however, even an inch counts.

However, it’s still possible to defy the norm if you are really skilled. For instance, Muggsy Bogues may only be 5 feet and 3 inches tall, but he used to be a fantastic NBA player.

Fortunately for short people, a lot of employers today no longer require employees to meet minimum height requirements. Gone are the days when applicants have to be at least a particular height to be hired.

These days, imposing minimum height requirements is being considered as height discrimination or heightism.

In the past, tall females were often encouraged to work as flight attendants. On the other hand, short females were usually told to seek different career paths. It’s a good thing that many airline companies of today no longer require female flight attendant applicants to meet minimum height requirements.

Here are the following physical attributes that many airlines are looking for in females who wish to work for them as flight attendants:

Keep in mind that different airlines may look for different physical attributes. The same is true for other industries.

For instance, a courier company may prefer to hire people who are tall enough to be able to use bicycles properly. It’s for the safety not only of the employees but also of motorists and pedestrians.

However, money-wise, it cannot be denied that tall people tend to make more cash than short people. As a matter of fact, experts say that an extra inch can add an estimated $800 to the yearly salary of a person.

Looking an Inch Taller Easier Than One Might Think

Provided that your height is not being seen on your resume or online dating profile, no one has to know that you are an inch shorter than another person.

As a matter of fact, people may have a difficult time figuring out which of the two of you is taller by an inch because that much difference in height can be visually insignificant.

Besides, it can be quite easy for an inch to be added to one’s height — unless we are talking about indicating your height on your resume or online dating profile as that would be lying.

For instance, you can appear an inch taller by merely having a tall hairstyle. As a matter of fact, looking several inches is possible if you sport an 80’s hairstyle, which can be best described as being voluminous. Wearing shoes with heels can instantly make you taller.

Additionally, losing some weight can make a person to look taller too.

If you are not happy with the boost in height that you can get from wearing high-heeled shoes, you can always try using height-increasing insoles. The bottom line is that, in person, there are various things that may be done to make you appear taller by an inch or more.

Is 3 inches a big difference in height? A difference of 3 inches can be quite noticeable. This is especially true if the individuals being compared in height are standing right next to each other.

Is it better to use centimeters than feet and inches when stating height? Because inches are commonly rounded off to the nearest numbers, using centimeters is a more accurate way to express your height.